Marmee & Louisa: The Untold Story of Louisa May Alcott and Her Mother 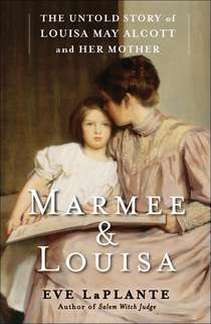 The acclaimed and “meticulously researched” (People) biography that actor Laura Dern—who plays Marmee in the Little Women film—calls “a massive influence [that] you feel as a cord of the film.”

In this groundbreaking work, LaPlante paints an exquisitely moving, utterly convincing portrait of a woman decades ahead of her time, and the fiercely independent daughter whose life was deeply entwined with her mother’s dreams of freedom. Based on newly uncovered papers, this moving portrait of Louisa May Alcott’s relationship with her mother transforms our view of one of America’s most beloved authors.


“One of the top ten books of the year.”
— National Public Radio

“In this meticulously researched look at Louisa May Alcott and her mother, LaPlante shatters myths about the supposedly passive Marmee, replacing them with a portrait of a woman who fought for a woman’s right to education, professional and maternal satisfaction, and power.”
— People

“Abigail May Alcott is at the center of Marmee & Louisa ... ‘Marmee,’ as her daughters called her, was a fine writer, an indefatigable reformer, a devoted teacher — and, above all, Louisa’s literary lodestar ... [After] the wildly popular Little Women...Bronson was in clover. He was, he crowed, ‘the Father of Miss Alcott.’ At last, people came to hear him lecture. To his credit, though, and after his fashion, he mentioned in passing that Louisa’s mother hadn’t yet received ‘her full share.’ To her credit, LaPlante evens the score.”
— New York Times Book Review

“The single most memorable character from a 2012 book…[is] Louisa May Alcott’s mother, Abigail, who is one of the subjects of Eve LaPlante’s Marmee & Louisa – someone I knew nothing about and whose activist life and tart, intelligent writing just blew me away.”
— Salon

“Superbly crafted … Not only an impeccably documented and verified biographical masterpiece, but also a genuine story of women who were heroines of their time, defying the social and political conventions of 19th-century America … Once the silent mentor, ‘Marmee’…is now a potent feminist voice … A compelling and intensely moving story whose truth is all the more powerful for being fleshed out in such an engaging and heartfelt style.”
— Bookreporter

“An important book about an important relationship. Writing engagingly and with precision, Eve LaPlante sheds new light on the Alcott story, a story that is in some ways the story of America.”
— Jon Meacham, Pulitzer Prize winner, bestselling author of Thomas Jefferson

My Heart Is Boundless: Writings of Abigail May Alcott, Louisa’s Mother 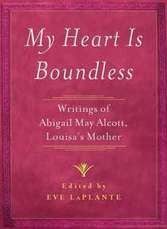 The first edition of Abigail May Alcott’s private papers, which actor Laura Dern—who plays Marmee in the Little Women film—calls “a beautiful book of letters.”

“Eye-opening and vibrant … Abigail is resilient, loyal, ‘theatrical, poignant, passionate, and often satirical,’ devoted to liberty and Louisa’s literary efforts. Sleuth and scholar LaPlante has immeasurably enriched American letters by reclaiming ‘an American writer and thinker who has for too long been ignored.’”
— Booklist

“Vibrant ... Many of [Abigail’s] reflections and worries and prayers ring as sonorously today as when Abigail wrote them nearly two centuries ago: how to find one’s voice, how to live true to one’s ideals, how to engage with life’s problems...and how to raise the next generation.”
— Seattle Times

“Abigail was a tart observer, especially of gender inequalities ... Throughout her journals, Abigail is charmingly blunt, confessing, among other things, her ‘disrelish of cooking’ and her ‘enjoyment’ of her separations from her husband.”
— Maureen Corrigan, Fresh Air

“A compelling documentary portrait of the real Marmee, whose life provided the impetus for Little Women and who emerges here as a noteworthy woman in her own right.”
— Kirkus Reviews
BUY NOW:     Amazon    Barnes & Noble    IndieBound    Books-a-Million

Feel free to contact the author at eve@evelaplante.com.
For a review copy of Marmee & Louisa or My Heart Is Boundless, please contact publicist Erin Reback at (212) 698-7426 or erin.reback@simonandschuster.com.
For a review copy of Salem Witch Judge or American Jezebel, please contact publicist Julie Burton at (415) 477-4407 or julie.burton@​harpercollins.com.
To schedule an interview or event, please email eve@evelaplante.com or erin.reback@simonandschuster.com.